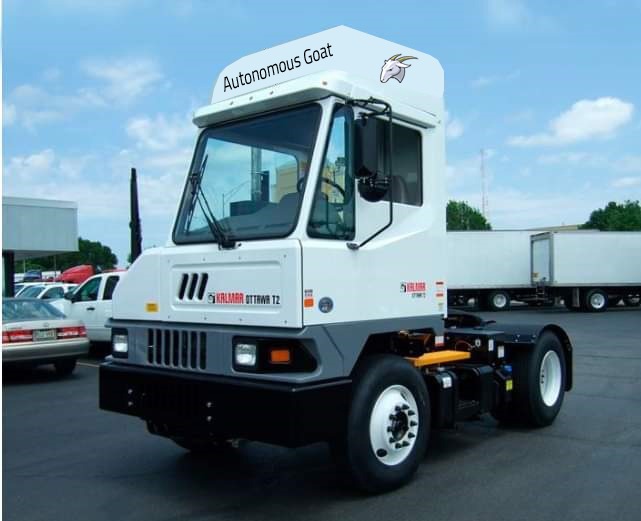 Yard trucks also known as a terminal tractor, shunt truck, tug, spotter truck,or yard goat, are the small trucks that move trailers around warehouse property to be loaded and sent to other locations. AutoGoat transforms standard commercial yard trucks into autonomous vehicles. And that’s the AutoGoat difference. The company modifies existing vehicles rather than building yard trucks from scratch, saving warehouse owners and logistics operators money on replacing their fleets with new, built-from-the-ground up vehicles, according to Roger Crabb, AutoGoat’s CEO.

“The AutoGoat is the answer to reduced wear & tear, around the clock, complete control of load scheduling and dispatching while keeping the production lines moving. The AutoGoat never gets tired. It also performs physical yard checks and generates the list of resources available for transporting your products. If you have a scheduled dispatch time for a load, the AutoGoat will notify you if the load has been picked up or not and at what time.”

Another advantage of AutoGoat: by using existing vehicles, facilities won’t have to redesign their yards to accommodate the coming wave of autonomous vehicles.

Mr, Crabb is a third-generation fleet manager and heavy-duty commercial vehicle technician who served as a national fleet maintenance manager for a Fortune 100 company. He enlisted his good friend, a technology solutions architect Lane Fowler, in the AutoGoat enterprise after recognizing that autonomous vehicles are the next step forward in supply chain logistics.

It has been reported that nearly a dozen companies are developing autonomous trucking solutions, including Elon Musk. Autonomous trucks rely on cameras and sensors, which feed data to a computer, which in turn controls the vehicle with skills learned through an enormous amount of training and simulation. Trucks are a better platform for autonomy than passenger vehicles because they move critical goods across the country

McKinsey & Company recently reported that autonomous trucks will change the cost structure and utilization of trucking, which will lower the cost of consumer goods, and noted that 65 percent of the nation’s consumable goods are trucked to market. With full autonomy, operating costs would decline by about 45 percent, saving the United States for-hire trucking industry between $85 billion and $125 billion.

For more information or to pre-order a system for Q3 2021, visit Autogoat.co.