Entering the 5th of February 2021, the Abu Dhabi T10 League witnessed the qualifiers and both the eliminator rounds. But before diving into today’s match here is a quick recap of how the final stages of the Super League stacked up to be.

First match of the evening was between the Deccan Gladiators and the Maratha Arabians which was won by the Deccan Gladiators by 29 runs. Deccan Gladiators set a target of 120 runs for 4 wickets. The Maratha Arabians folded in 91 runs from 3 wickets. Mosaddek Hossain became the highest scorer with 44 runs from 21 balls. The second match of the evening was between the Qalandars and the Delhi Bulls. Delhi Bulls won the match by 9 wickets. Qalandars set a target of 107 for 6 wickets which was easily overcome by the Delhi Bulls. The final match of the night was fought between Team Abu Dhabi and the Bangla Tigers. The match was won by Team Abu Dhabi by 21 runs. Team Abu Dhabi set a target of 116 for the loss of 3 wickets. Bangla Tigers wrapped up their innings in 95 runs from 9 wickets. Paul Stirling was the highest scorer in the match with 64 runs from 32 balls. 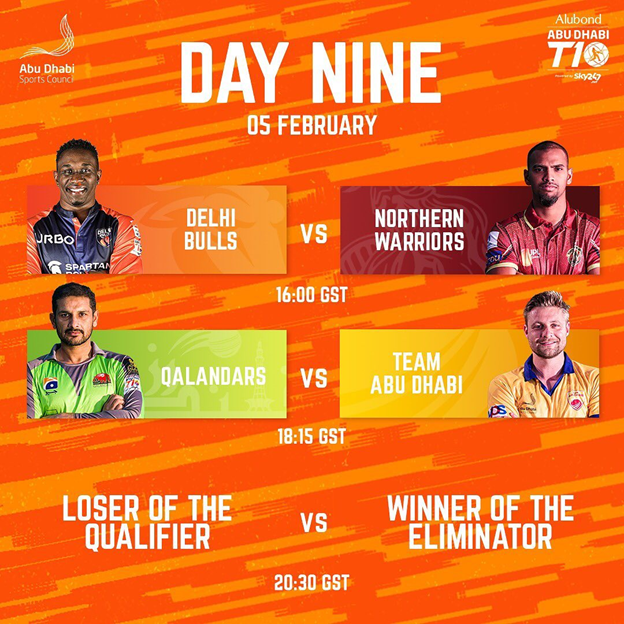 Wrapping up the qualifiers and the eliminators, here is a look at tomorrow’s matches. The place for the 3rd playoff will be battled against Qalandars and Team Abu Dhabi. The finals tomorrow will also see Delhi Bulls against the Northern Warriors marking the end of this tremendous journey

FairPlay News is the number one platform for cricket and sports. The true home of the Abu Dhabi T10 League, fans can visit FairPlay News anytime to stay updated with the latest scores right from the pitch.